Measuring the Best Performers in IT 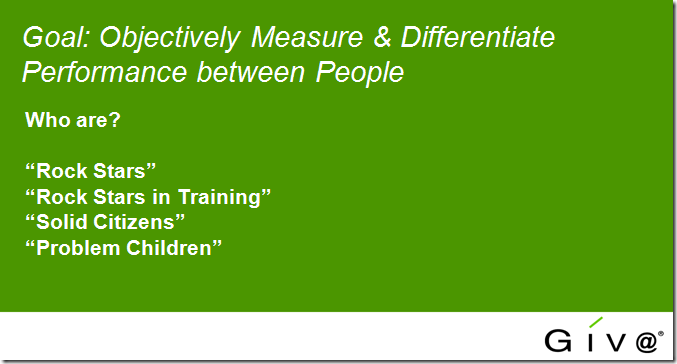 "Rock Stars"…we all love these producers. The company gets great value from these people. They are the work horses. They're smart, competent and confident and your customers love them. You want to keep them. In a poor economy, you want to keep your rock starts and attract more rock stars from your competition.

"Stars in Training"….offer them training and mentoring to get them to realize their potential. They are typically younger and have a desire to grow and excel.

"Solid Citizens"…dependable, competent, maybe don't have all the skills or don't push themselves like the "Rock Stars"…ok with being a "Solid Citizen"…nothing wrong with that.

"Problem Children"…all leader have experience with these folks. It's some times difficult to terminate poor performers… Giva worked with a customer that was a major international law firm that would not terminate poor performing IT support people. They did not have any objective data. Only anecdotes of information. They feared an age discrimination lawsuit. They had no hard data to support the poor performance. After 6 months of using Giva reports, they terminated three people in IT. The IT management provided the Human Resources dept. with objective data from Giva reports. The conservative firm felt confident they had objective data to support the terminations. This significantly lifted morale in the IT groups. Terminating poor performers always lifts morale. On an emotional level, people never like to see terminations, but when others are unfairly carrying the workload of a poor performer, etc., morale is always lifted and motivation is increased. Moreover, team morale is killed when competent people are terminated because of politics, personality, favoritism, and other subjective measures.